Painting and varnishing have to go on just about all the time during a long restoration project.   Fortuna II was no exception.  The hull is no sooner stripped off for inspection than primer goes back on to help prevent drying out.  New joinery is painted and varnished as and when it is built – ideally off the boat.  Exposed and replaced structural members are painted when they are accessible.

Wheelhouse beams get painted before the wheelhouse deck is laid

Even the ballast keel gets filled and faired while it is re-painted.

Cleaning out and painting the bilge was one of the less glamorous job. 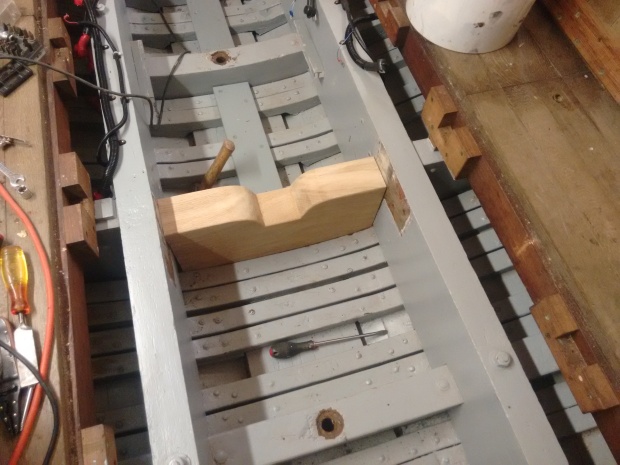 The ‘floor’ being replaced was due to struggles removing corroded keel bolts.  Note the substantial longitudinals.  They are the engine beds which run all the way forward into the fo’c’sle.  They are more substantial than the keelson, which can just be seen between the closely spaced frames.  We found that a shellac based primer was the best way of getting paint to adhere to a diesel and oil stained bilge.

The topsides had been splined in order to provide a stable basis for painting.  It was, of course, necessary to fair the topsides after splining before starting again, for the second time, with primer.

I got pretty tired holding the large Makita belt sander – which is how most of the fairing got done. 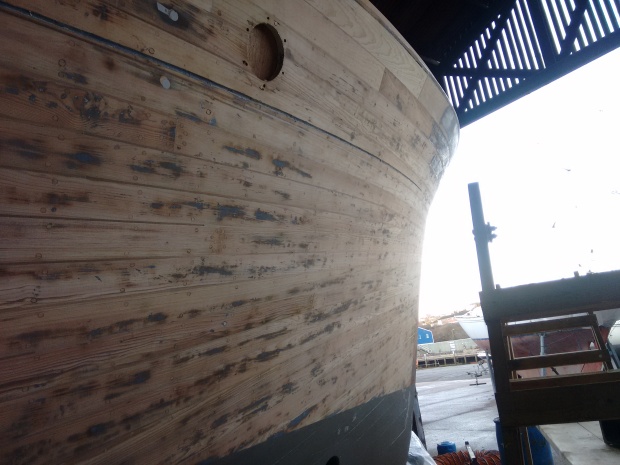 We had thrown away the somewhat florid (and incorrect) name-board that had been decorating Fortuna II’s transom.  Carving her name was one task that I was happy not to delegate to a specialist.

As launch date approached the pace had to accelerate but we nevertheless managed to get a respectable number of coats of varnish on the external brightwork.

Once we got towards the end of the hull preparation stage I was happy to defer to and learn from to Mike Kirk who managed to obtain a rather satisfactory finish.  I suspect that not many people would be able to obtain such a finish operating in a draughty, dusty, open sided rain shelter. 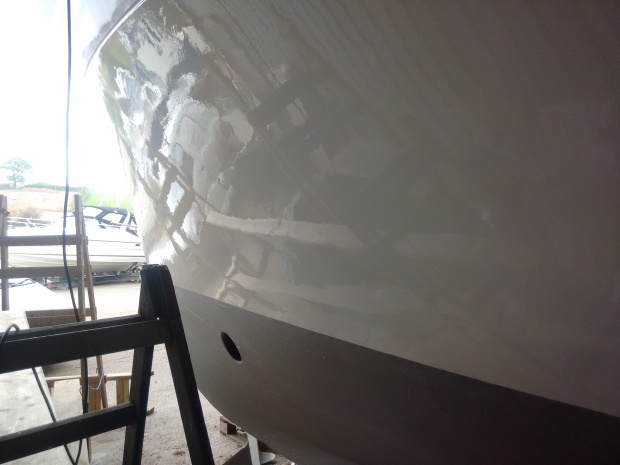 Just about the last job before Fortuna II came out of the shed was to paint the deck.

Anti fouling goes on a few days before she is launched.  it’s good to be out in the sunshine!

There are a few shadows visible in the concave sections of the flared bows (the very hardest place to operate a belt sander for a sustained period) but otherwise the finish, we thought, was pretty acceptable.