Fortuna II changed hands in 2013 and I was approached by her new owners with a view to addressing items raised by the pre-purchase survey and generally sorting the boat out.

Looking a bit scruffy with some soft planking at the deck step she was nevertheless sold in working order (i.e afloat with an engine that started) so I accompanied the new owners in extracting her from Exeter canal basin. 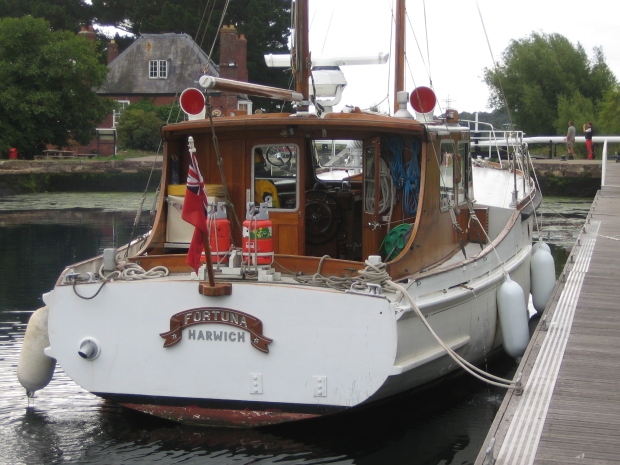 We, much to my surprise, reached Dartmouth without incident and once the tide was favourable motored  up the Dart to Totnes where Fortuna II was craned out at Baltic Wharf.  The expectation at this stage was that the work required could be completed over a winter and that she would be re-launched in 2014.

However, this was not to be and it was May 2017 before Fortuna II next came out of the long shed.  The story of what happened in between is described in the following pages.  Note that the descriptions of work do not follow, in any detail, the chronology in which work was actually carried out.  Unless you have a serious interest in wooden boats I suggest you skip all the details and enjoy the pictures of Fortuna II below, which show her in her finished state.

After all this work she came out of the shed to be rigged and launched for  sea trials.

Out of the long shed – at last!

At launch in 2017 Fortuna II initially sat alongside the wall in  Baltic Wharf to take up – which she did pretty promptly.

Afloat alongside the wall at Baltic Wharf

She was then moved down river to Dartmouth where she spent the summer months while the owners tested her out and a small number of running adjustments were made.

On the pontoons in Dartmouth

Nigel Sharp came over, took some photos and wrote a piece for Classic Boat (See CB #364, October 2018) .  One of the photos that he took (shown below) defines, for me, Fortuna II as a very special, stylish, comfortable and capable motor-yacht.

Although I did the first two winters of the project working alone,  the remainder of the project involved work with a number of additional people.  In particular I am indebted to Mike Kirk, who worked alongside me through three cold winters, Pete Nash who stepped in to build the galley, Chris Rothwell who took care of  electrical systems, Lee Rogers who did the rigging, Steve Jamieson who commissioned the engine and finally Richard Lambert-Gorwyn, Toby Chadwick and Bob Strawson who did all those jobs that no-one else really wanted to go near!

Fortuna II is now in Scotland enjoying a new lease of life.  She is based at Ardfern and cruising, for now, the West Coast of Scotland.

Anchored in Loch Sheldaig, summer of 2018.

The work on Fortuna II was shortlisted for a 2019 Classic Boat Award (Restored Powered Vessels over 40ft) and awarded ‘runner up’ in her class. 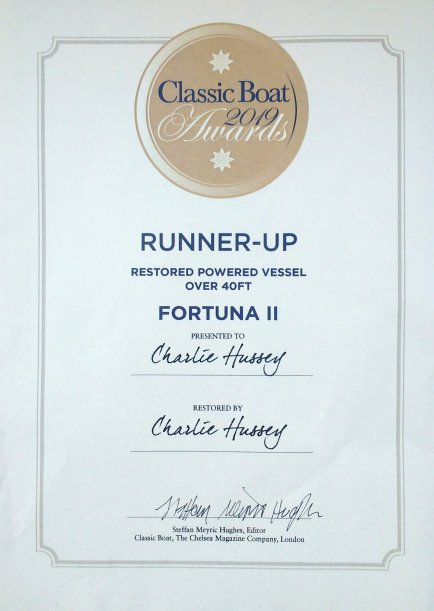